Practice Makes Perfect - the unseen side of music making

I've always loved music and used to play piano, saxophone and guitar. However, my creative energies switched over to photography in 2007 and I've devoted my attentions to that ever since. Most of my photography has been landscape and tabletop set ups but I'm now turning my lens onto musicians.

When you hear musicians performing, from a symphony orchestral player to a busker in the street, you are hearing the result of years - often lifetimes - of practise and study to polish their technique and performance.

This work is repetitive, solitary and requires a considerable time investment but it's something the listening public isn't always aware of. I am exploring the repetitive and time-consuming element through photography to provide an insight into the private side of music making. 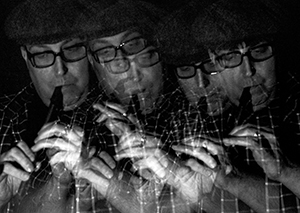 The picture on the right is one of my preparatory shots. It's a selfie taken with a 1950s Agfa Isolette ii folding camera using 120 medium format film. Working in a darkened room, I first opened the camera shutter and then fired a remotely-triggered flash to capture each exposure. The film was advanced slightly between exposures to produce the multiple, overlapping images.

The main technique I am using is light painting. This involves shooting a musician playing in a semi-dark room. The shutter is opened for between six to 20 seconds and coloured torchlight is played over them. The result, captured on a digital camera, is a combination of blurred movement and multiple exposure.

The image at the top of the page is one of my favourite light paintings produced so far. It shows flute player Eddie Parker playing a bass flute. The exposure time was about ten seconds and I had a blue torch in one hand and a white one in the other. At the start of the shot, Eddie was playing a Hendrix-style version of The Star Spangled Banner and suddenly he stopped playing and laughed. I was delighted afterwards to see that I'd caught his huge grin along with his serious playing face. Some might say the picture is too blue but I feel it captures Eddie's humour and the fun of the moment. 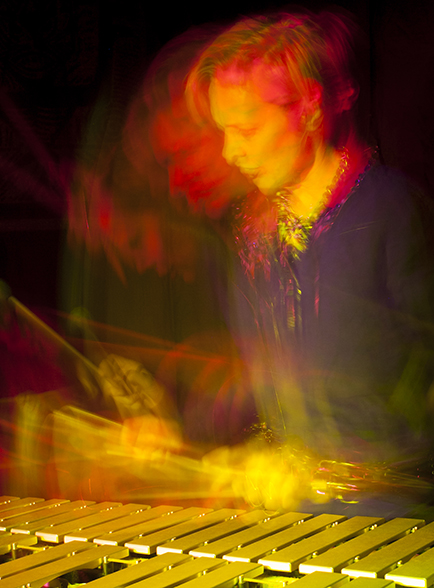 The image on the right shows vibrophone player and composer Jackie Walduck in action. I find the contrast between the sharply defined metal of the static instrument and the movement of Jackie's hands holding the mallets and her head during the exposure - about 12 seconds in this case - very intriguing.

No light painting is ever exactly the same and the results can be very surprising. Like music, they take time and practice to perfect and each session to date has presented fresh challenges and taught me something new about the process. However, it's very rewarding to open the images up on screen after the shoot to see the results.

I have been using a digital camera as the main tool for light paintings as I am able to review the exposure levels by checking the back display. However, after a few sessions I decided to take a big risk and load an Agfa folding camera with Kodak Portra film and try a series of shots.

My subject for this experiment was piano player and composer Huw Warren, who is particularly noted in the jazz and new music community for reaching into the piano to pluck, strum or dampen the strings to alter their sound. The result is that he will often have one hand on the keyboard and the other inside the main body of the piano - always an interesting sight for the spectator.

I started out the light painting session with my digital camera and after a few adjustments to determine the ideal exposure time, turned to the film camera. All I could do was set the settings to bulb mode, open the shutter, count slowly to ten as I waved the torches about and then close the shutter again. 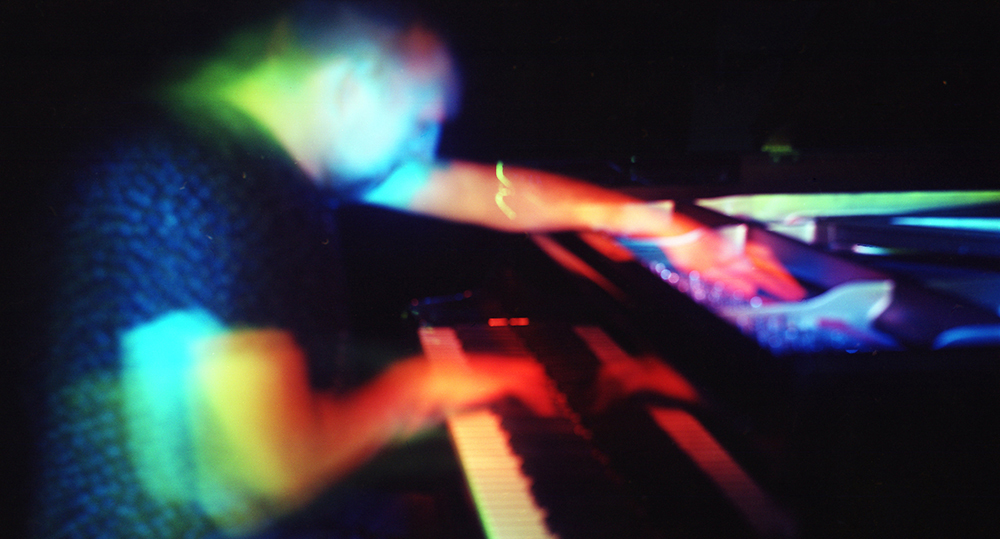 As you can see in the image of Huw above, the focus was badly off. As I used a tape measure to determine the focal distance, I fear the ancient lens may be out of kilter. However, the Portra film did its work in capturing beautiful colour and the result is pleasing in an impressionistic way. Personally, I like to get at least part of a light-painted subject in clear focus and I won't be using that particular camera for this purpose again. I've since invested in an Exacta - an early film SLR - and the great test has yet to be done...

I mentioned testing multiple exposure processes at the start of this article, now you get to see one of the results.

The image above shows trumpet and flugelhorn player and composer Loz Speyer working out on trumpet while I took multiple images on a Holga camera. Each image was lit with flash but only partially wound on between each exposure. I particularly like the way Loz is caught catching his breath in the final shot - bringing the practice session to its natural conclusion.

So far, I have photographed nine different musicians and my initial goal is to photograph three more people. Ideally, I'd like to build up a collection illustrating players of as many different instruments as I can find.